…the International Space Station, that is! This fantastic video was shot by ESA astronaut Paolo Nespoli as the Expedition 27 team departed the Station in a Soyuz capsule on May 23, 2011. It shows the ISS with the docked shuttle Endeavour from several different angles as the Earth rotates 220 miles below. Wow… what a view!

Newly released video shows the International Space Station together with the space shuttle, the vehicle that helped build the complex over the last decade. The video was shot by European Space Agency astronaut Paolo Nespoli from the Russian Soyuz spacecraft that undocked from the station on May 23. He, Russian cosmonaut Dmitry Kondratyev and NASA astronaut Cady Coleman were departing the station for a return to Earth after five months on the station. Nespoli documented the station from a distance of 600 feet as it was rotated 130 degrees.

In addition to this video, several high-resolution photos have been released showing the ISS and Endeavour in orbit from the unique viewpoint of the Soyuz capsule. This is the first and last time images like this will ever be seen… they truly are gems of spaceflight history. 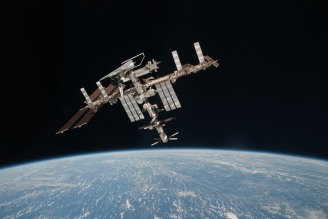 This was the final mission for Endeavour, and the second-to-last shuttle mission of the 30-year-long program. It brought the final components to the ISS, completing its construction.

More images can be found on SpaceflightNow.com.