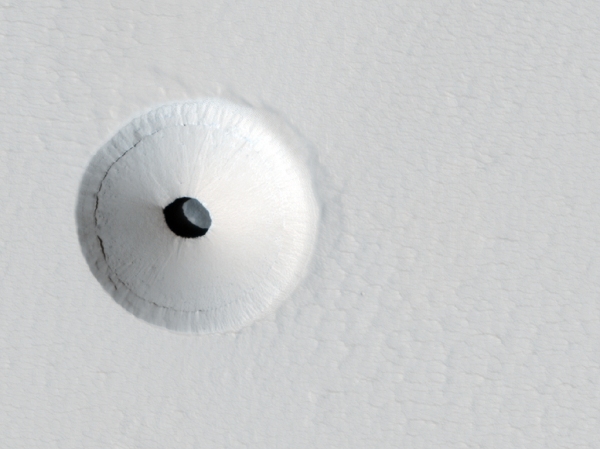 This new HiRISE image gives us a deeper look into Mars… literally!

Earlier this year a crater was spotted on Mars with a dark spot at its center. When the HiRISE team at the University of Arizona took a closer look with the MRO’s high-resolution camera they saw that the spot is actually a 115-foot-wide skylight that opens into an underground cavern! The cavern is most likely a section of an empty lava tube, leftovers from ancient Martian volcanic activity.

Based on the shadows it’s estimated that the pit is about 65 feet deep. But, how much of that is material piled up on the floor of the cavern from the surrounding crater itself? And what caused the crater to form in the first place? These are questions that remain to be answered.

The image itself is false-color, the hues denoting the texture and composition of the surface material and not the actual color as would be seen in visible light.

It’s really a tantalizing glimpse beneath the surface of Mars. One has to wonder how large that space is, and how far it extends… and what secrets of Mars’ history it may contain!