Now over four months after the historic and long-awaited flyby of Pluto by New Horizons, planetary scientists have had a steady stream of unprecedented data arriving on Earth from the outwardly-speeding spacecraft. We’ve learned more about Pluto in the past few months than we had over the decades before and the information is still being analyzed — and is still coming. This surprising little world and its strange family of mismatched moons, 33 times farther from the Sun than us, has become in the latter half of 2015 the scientific “star of the Solar System.” (Take that all you can’t-be-a-planet folks!)

“It’s hard to imagine how rapidly our view of Pluto and its moons are evolving as new data stream in each week. As the discoveries pour in from those data, Pluto is becoming a star of the Solar System. Moreover, I’d wager that for most planetary scientists, any one or two of our latest major findings on one world would be considered astounding. To have them all is simply incredible.”
– Dr. Alan Stern, New Horizons Principal Investigator, SwRI

If you have been following along with the New Horizons mission you already know about Pluto’s mountain ranges, surface color variations, and blue-sky atmospheric hazes. (Which are each astounding in their own right.) Last week, during the 47th annual meeting of the Division for Planetary Sciences of the American Astronomical Society in National Harbor, MD, even more findings about Pluto were revealed, adding exponentially to our knowledge — and our curiosity — about the distant dwarf planet.

Below are some of the key announcements about Pluto made during the DPS meeting, excerpted from a Nov. 9 news release:

Pluto Could Have Ice Volcanoes

New Horizons geologists have combined images of Pluto’s surface to make 3-D maps that indicate that two of Pluto’s most distinctive mountains could be cryovolcanoes—ice volcanoes that may have been active in the recent geological past.

The two cryovolcano candidates are large features measuring tens of miles (tens of kilometers) across and several miles or kilometers high. “These are big mountains with a large hole in their summit, and on Earth that generally means one thing—a volcano,” said Oliver White, New Horizons postdoctoral researcher with NASA’s Ames Research Center, Moffett Field, California. While their appearance is similar to volcanoes on Earth that spew molten rock, ice volcanoes on Pluto are expected to emit a somewhat melted slurry of substances such as water ice, nitrogen, ammonia, or methane on Pluto.

White stresses that the team’s interpretation of these features as volcanoes is tentative. However, “If they are volcanic, then the summit depression would likely have formed via collapse as material is erupted from underneath. The strange hummocky texture of the mountain flanks may represent volcanic flows of some sort that have travelled down from the summit region and onto the plains beyond, but why they are hummocky, and what they are made of, we don’t yet know.”

If Pluto is proven to have volcanoes, it will provide an important new clue to its geologic and atmospheric evolution. “After all, nothing like this has been seen in the deep outer solar system,” said Jeffrey Moore, New Horizons Geology, Geophysics and Imaging team leader, also from NASA Ames.

Little Pluto Has Been Geologically Active

Crater counts used to determine surface unit ages indicate that Pluto has ancient surface areas dating to just after the formation of the planets, about 4 billion years ago. In addition, there’s a vast area that was geologically born “yesterday,” meaning it may have formed within the past 10 million years. This area – informally named Sputnik Planum – appears on the left side of Pluto’s “heart” and is completely impact-free in all images returned to date. Scientists wondered if Sputnik Planum’s smooth, icy plains were an oddity; did a recent geological episode form the plains long after all other geologic activity ceased?

Apparently not. New data from crater counts reveal the presence of intermediate or “middle-aged” terrains on Pluto as well. This suggests that Sputnik Planum is not an anomaly—that Pluto has been geologically active throughout much of its more than 4-billion-year history.

New Horizons data show Pluto’s upper atmosphere is significantly colder and therefore more compact than Earth-based models had indicated. As a result, scientists have discovered that Pluto’s atmospheric escape rate is thousands of times lower than had been thought. It now appears that Pluto’s atmosphere escapes by the same mechanism as do gases from the atmospheres of Earth and Mars – rather than the previously believed escape process that more resembled escape from cometary atmospheres.

The New Horizons mission is also shedding new light on Pluto’s fascinating system of moons and their unusual properties. For example, nearly every other moon in the solar system, including Earth’s moon, is in synchronous rotation, but not so of Pluto’s small moons. These small satellites are spinning much faster, with Hydra – the most distant moon – rotating an unprecedented 89 times during a single lap around Pluto. Scientists believe these spin rates could be chaotic (i.e., variable) because Charon exerts a strong torque that prevents each small moon from settling down into synchronous rotation, which means keeping one face toward the planet.

Also scientists expected Pluto’s satellites to wobble, but not to the degree seen by New Horizons. “Pluto’s moons are behaving like spinning tops,” said co-investigator Mark Showalter of the SETI Institute in Mountain View, California.

The animation above shows a polar view of the Pluto system, with Pluto and Charon co-orbiting in the center in tan and then the smaller moons outward Styx (red), Nix (yellow), Kerberos (green), and Hydra (blue). 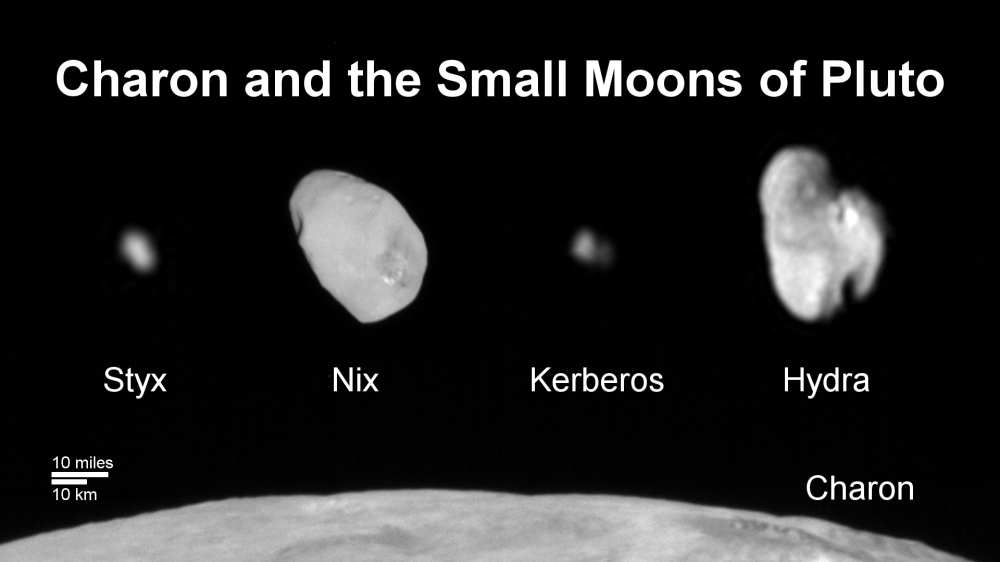 Thanks to the radioscience experiment (REX) instrument aboard New Horizons scientists have been able to accurately measure the atmospheric surface pressure on Pluto using radar waves beamed from Earth to the spacecraft as it passed behind Pluto after its flyby. The preliminary analysis of REX data has shown that current surface pressure on Pluto is about 10 microbars, or 1/100,000 the air pressure on Earth at sea level. These are within previously estimated ranges but now much more accurately known. Learn more about those findings here.

Currently over 95 million miles (153 million km) beyond Pluto, New Horizons has adjusted its course to meet up with its next target — a small Kuiper Belt object named 2014 MU69 — on New Year’s Day in 2019. The New Horizons team will submit a formal proposal to NASA for the extended mission to 2014 MU69 in early 2016. The science team hopes to explore even closer to MU69 than New Horizons came to Pluto on July 14, which was approximately 7,750 miles (12,500 kilometers).

“New Horizons is healthy and now on course to make the first exploration of a building block of small planets like Pluto, and we’re excited to propose its exploration to NASA,”said PI Alan Stern.

But New Horizons hasn’t forgotten about Pluto yet; New Horizons still has plenty of data to send back to Earth from its July 14 flyby! In fact it will be returning high-resolution images and science data over the next year.

In closing, watch this short video about the importance of planetary exploration by Will Woods, a doctoral candidate in Electrical Engineering at Stanford University and member of the REX science team, featuring Stanford senior scientist Dr. Ivan Linscott.

“The Universe is still out there, and it’s still calling to us.”
– Dr. Ivan Linscott, Stanford University