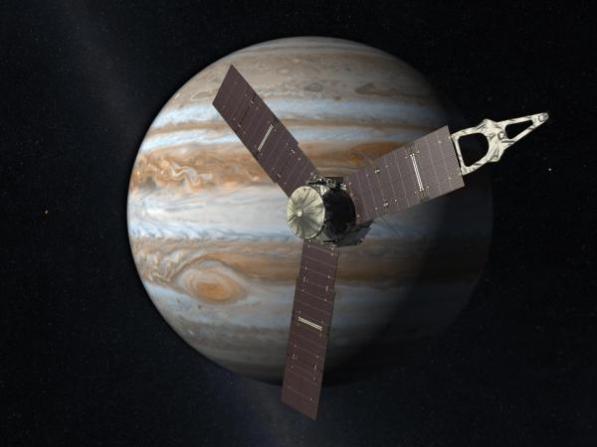 NASA’s Juno spacecraft will remain in 53-day-long orbits of Jupiter rather than rocket down to smaller 14-day orbits, despite the mission’s original plan to do so. Announced today, Feb. 17, this decision comes after evaluation of issues with helium valves that prevented orbital reduction burns in October and December of 2016.

“During a thorough review, we looked at multiple scenarios that would place Juno in a shorter-period orbit, but there was concern that another main engine burn could result in a less-than-desirable orbit,” said Rick Nybakken, Juno project manager at NASA’s Jet Propulsion Laboratory in Pasadena, California. “The bottom line is a burn represented a risk to completion of Juno’s science objectives.”

Even though Juno will remain in wider orbits its scientific objectives and capability to achieve them shouldn’t be affected—if anything, it will get a chance to explore more of Jupiter’s magnetic environment while reducing the time it spends in some of the more damaging regions of Jupiter’s radiation belts.

The solar-powered Juno spacecraft launched aboard a ULA Atlas V 551 rocket from Cape Canaveral on Aug. 5, 2011. After nearly five years and 1.7 billion miles of travel Juno arrived in orbit at Jupiter on July 4, 2016.