This is my favorite photo I captured during the August 21 solar eclipse from Charleston, SC. It shows a phenomenon called Baily’s Beads, which is caused by the last bits of Sun peeking through low points and between mountains along the limb of the Moon in the final moments before 100% totality. They’re only visible for a few seconds between the “diamond ring” effect (which I did not capture) and the appearance of the Sun’s outer corona, and I’m very happy to have caught them on camera!

I’ve never experienced (much less photographed) a total eclipse of the Sun before, and so I was limited to what I already know about photography and what I read online from those who have done it before. I was hoping to capture all phases of the eclipse from start to finish and assemble a nice montage, but unfortunately the weather in Charleston on the 21st wasn’t conducive to that—visibility through the cloud cover was spotty at best, and everyone there was extremely lucky to be able to see totality at all…many parts north of the city didn’t have any view due to thunderstorms! I was located a few miles southeast of the city at Fort Johnson, which is just across the river from the historic Fort Sumter.

In order to capture Baily’s Beads you have to shoot fast; that is, with a fast shutter. They are still parts of the Sun and so are very bright and prone to overexposure. I had my tripod-mounted Nikon D810 set to ISO 400 and an aperture (f-stop) of 8, and my unfiltered Sigma 150-600 telephoto lens prefocused on the Sun and Moon. I was shooting at 1/6000 sec, which resulted in what I thought were pretty underexposed images at first but realized after that they allowed me to catch the finer details of the solar prominences visible beyond the Moon’s silhouette and, of course, Baily’s Beads.

In the photo above north is to the right; I rotated the photo 90º for artistic effect. The purple around the limb of the Moon (spherical bodies don’t have “edges,” the visible edge is called the limb) is the Sun’s chromosphere and yes, it really did look that color in person!

The photo below shows the scene “correctly” oriented.

Baily’s Beads are named after Francis Baily, a 19th-century British astronomer who described them in detail after an eclipse in May of 1836. Baily didn’t discover them or even be the first to correctly explain them—that distinction goes to Sir Edmond Halley over a century earlier after a 1715 eclipse. But Baily’s description of them made an impact on his astronomical peers, and his name was and has since been associated with the effect.

They are visible both just before and just after totality; this photo shows the beads at third contact: 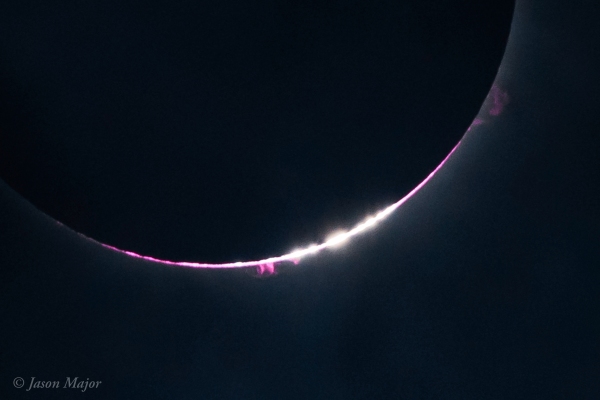 Now that we have a complete and accurate map of the Moon’s surface, thanks to NASA’s Lunar Reconnaissance Orbiter, scientists can predict where Baily’s Beads will be visible during an eclipse. But that doesn’t make these brilliant and fleeting stellar jewels any less beautiful. I’m looking forward to 2024 when I hope to catch another glimpse of them during the next total eclipse to cross the U.S.!

See more of my photos from the Aug. 21 eclipse here.